You are here: Home / Productivity / How to Get Started with Time Blocking

Eight hours of sleep. Half-day at work. Rush over meals.

Quality time with the family; and the rest of the day fretting over the never-ending chores while wondering the meaning of life.

Sounds familiar? In this fast-paced life, we want to meet every goal yet have so few hours to spare.

Since the probability of squeezing in all in 24 hours is “likely never”, we vaguely pick straightforward jobs and leave the rest for the next day.

And the cycle repeats. What if I told you there is an effective way to optimize your time? Don’t worry, I don’t intend to encourage following Nero Wolfe’s meticulous routine. (There’s a reason the guy is a fictional character).

Instead, I will share an incredible technique you can organize, customize and bring positive productivity to your lifestyle.

The technique is called Time Blocking.

What is Time Blocking?

Time blocking is a project management method designed to sharpen your focus.

The idea is that by assigning spots to each job on your calendar—or creating blocks of time—you remove distractions to monopolize your attention.

The concept, though, was initially meant to improve work productivity, which people have been incorporating into their personal lives as well.

In fact, if you think about it, you might’ve inadvertently seen it repeatedly! Let me give you an example.

Do you love cooking? If yes, have you read time-stamped recipes walking you through a step-by-step, including the completion period of individual actions?

The author uses time blocking for preparation and cooking.  Similarly, if an event is happening in your family and you’re the resident organizer, how will you handle it?

You would probably create a checklist.

Mentally calculate the time for the respective jobs and keep the notes with you constantly to cross items as you go along.  The example, while not in the strictest sense, is a crude version of time blocking.

How Does Time Blocking Help If We Subconsciously Do It Already?

Indeed, we unintentionally employ time blocking. However, there’s a little matter of finesse to consider.

On average, we get interrupted seven times per hour, wasting precious three hours daily. Time blocking helps you in making the best of your day—Or more precisely, it helps you avoid the following five.

Regardless of the job’s nature, getting started is what people dread the most—particularly when the task is tedious.

The moment you consider taking charge of a project, lethargy suddenly sets in, and you end up doing trivial things.

Psychologists believe procrastination is a lifelong trait. If you’re a serial procrastinator, there’s unlikely a chance to get rid of it without an outside influence.

Time blocking is that external force, which leads you straight towards your task. Once you’re past it, the rest becomes surprisingly easy.

Most go for undemanding jobs before gathering the courage to go for the challenging ones.

We continuously defer the work until it’s looming over alarmingly, leaving us no choice but to undertake the unpleasant task.

This subconscious behavior is another branch of procrastination that Brian Tracy in his book “Eat That Frog” warned against it.

He believes postponing the hard task would only make it more laborious afterward.

It’s a logical deduction because despite reserving the demanding ones for last, they will remain forever in your mind and drain your energy.

Time blocking decides projects based on priority, giving precedence to pressing ones irrespective of their difficulty level.

Ever heard of Elon musk?  The Telsa CEO uses a time blocking technique called the 5-minute rule to deal with his hectic life.

From the moment he wakes up to the end of the day, he schedules every minute of the day to gain maximum productivity.

People generally spend two hours every day pondering over which among the multiple tasks is urgent enough to take up first.

By spending 13 minutes setting goals, you can save hours that otherwise would’ve been wasted agonizing over choosing the job.

Ever since the cellphone has taken over our lives, we’ve had too many distractions, leaving us open to unnecessary errors.

Seven distractions typically hound us every 60 minutes, not to mention the five minutes of struggling to get back.

With the ready availability of cell phones, three hours of our day is burned into screen time.

Tools like RescueTime allow you to track your screen time, websites, and even categorize websites according to their importance. 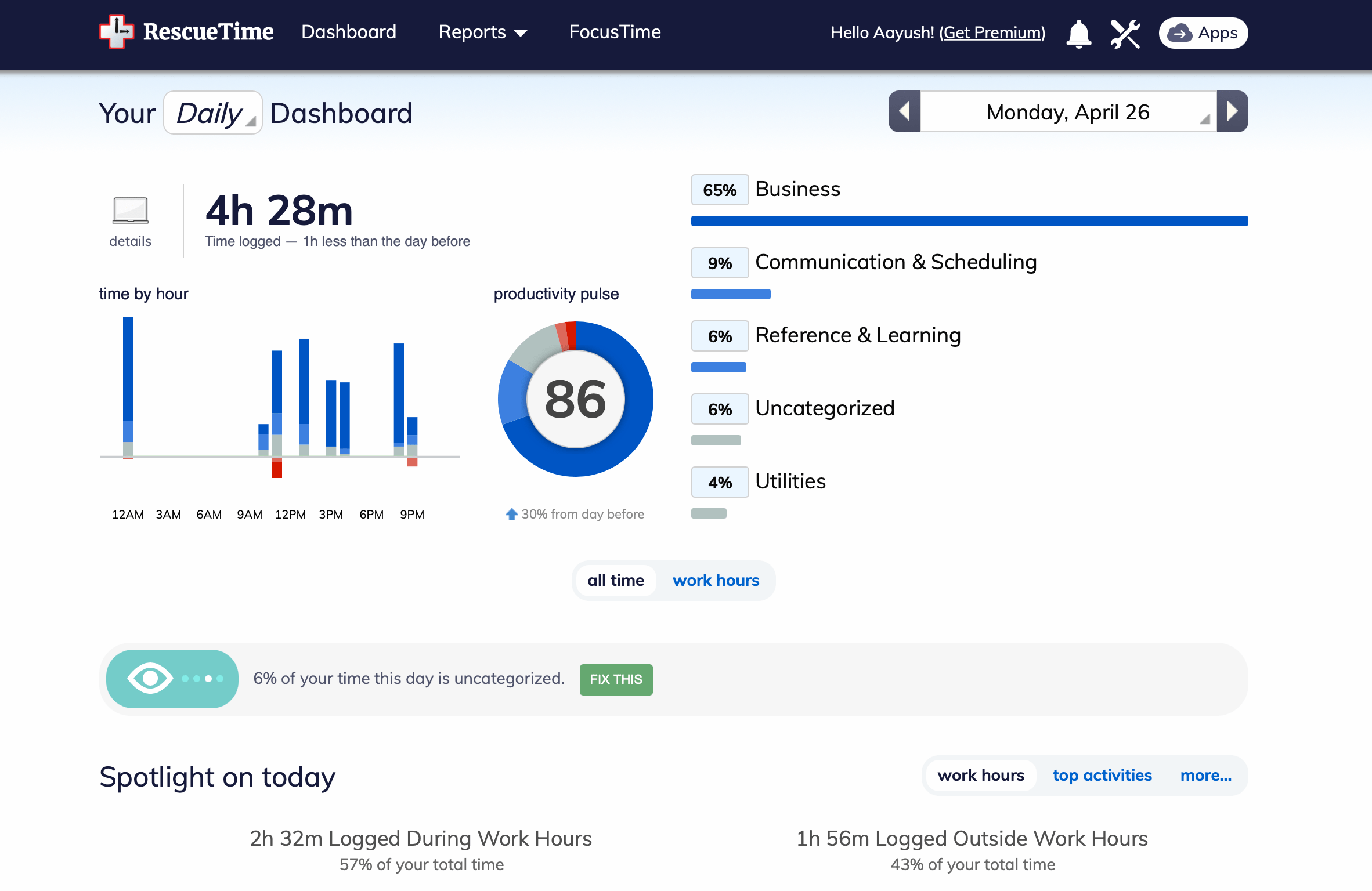 It sends you a weekly report with detailed insights on where you spend most of your time when you’re on your computer, iPad or smartphone.

Time blocking veritably kills distractions. As you allocate blocks for a specific purpose, your focus remains on them, saving you from meaningless distractions.

While I confess, it’s easier said than done, if you’ve managed even 50% of the uninterrupted job, that’s a feat well worth the effort.

This term may appear entirely unrelated, but looking at it from a different angle, you will quickly realize why I mentioned it.

During your life, how often do you hear, or say “Sorry, I didn’t have time to get it done.” Or the more frequent phrase “Ah, I am busy at the moment.

Time blocking weeds out such phrases, forcing you to take accountability for missed commitments—commitments that could be as simple as meeting a friend or doing a favor to your colleague.

Everyone knows there aren’t just enough hours to get everything done.

So, we fulfill our promises by making time for them.  Now that you’re aware of the benefits of time blocking, let me show you how to apply it smartly.

How to Use Time Blocking Effectively

To get started, make a list of essential and non-essential jobs, for starters.

We are a creature of habit and repeat certain functions regardless of the time constraint.

Still, whenever the mood strikes, we often pick up random jobs we usually ignore. Such as; conducting an employee’s meeting, you’ve been dragging in favor of another job. Folding the laundry lying around for a week.

Or calling a dear friend you had been meaning to call for long.

And then there are rare occasions that appear without a warning.

Write down those basic activities followed by less frequent, and lastly, the scarcely considered projects. As you jot down all this, estimate the time of each task and allocate them on a priority basis.

This exercise follows The Pareto Principle to help you categorize primary and shallow tasks. Mr. Juran developed this concept, suggesting that out of ten projects merely two hold importance.

Below is the illustration of the 80/20 principle by Italian economist, Vilfredo Pareto:

Before setting up a schedule, you must have a template to follow.

Time blocking template is simply a blank table you use for your daily tasks.

The idea is to compose a standard guide customized to your perceived routine.

You are, of course, not obliged to recreate an exact table. As 70% favor a list form, by all means, build your template as you see fit. For clarification, though, assume it’s a table.

At the top corner, specify different colors for personal, professional, and break blocks. If I were to create a template, I would pick blue for writing, red for personal chores, green for exercise, and purple for weekly family gatherings.

To break it down further, I will choose pale blue for a client meeting (since blue is my chosen color for professional life). Light green for habitual gardening, and violet for the get-together.

I might even dive into minute details such as; meals, tea breaks, and small blocks for social media surfing.

You get my point.

Assigning shades is one way of distinguishing tasks.

However, follow the structure you feel comfortable with.  If the manual planning feels overwhelming, you’ll find several apps suited to your needs. 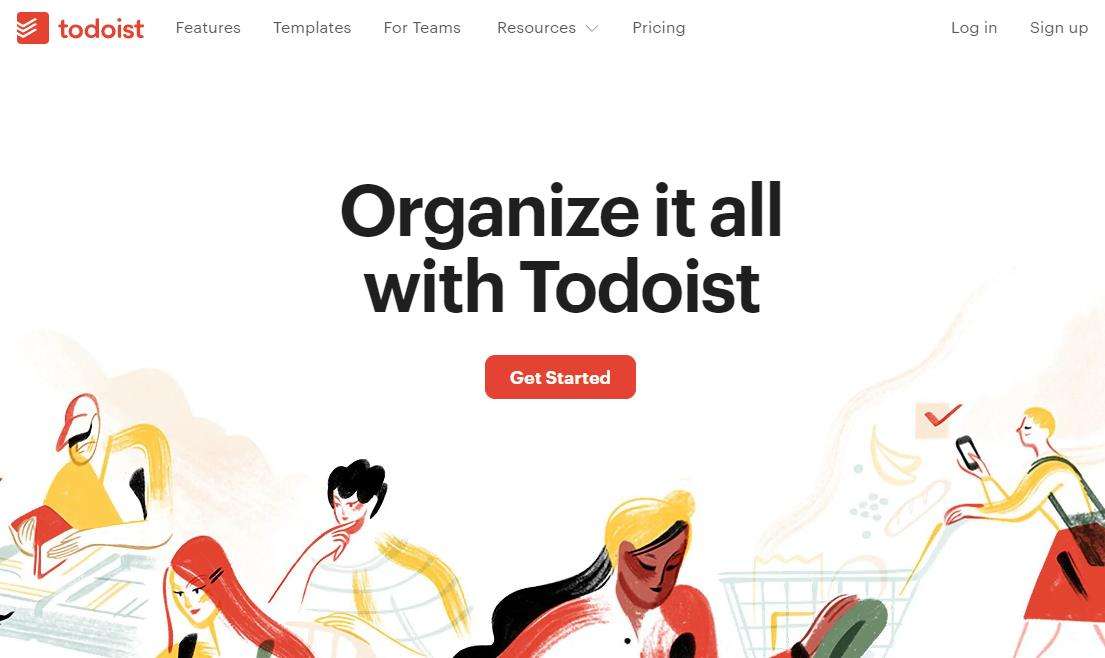 It is a task management app that combines a to-do list, planner, and reminder, all in one.

Get Plan is another productivity app reminding you of a board with sticky notes all over it. It’s visually appealing and best for a team.

Once you have constructed a template, deposit all your regular projects.

3. Fill Your Schedule and Set Deadlines

This is an extremely important part. You not only need to fill in the boxes but also establish a timeframe for each task.

Here are two tips to get you started.

One, reserve peak hours for difficult tasks as they require extra focus.

A morning person will likely be productive between 9:00am and 11:00am, while a night owl, after midnight.

In a nutshell, organize projects in a way to achieve maximum output and keep realistic deadlines.

I deliberated on highlighting the word “realistic” because we tend to either overestimate our capacity and assume tight deadlines or underestimate it by stretching them.

Are you familiar with Parkinson’s Law? It says your brain continuously adjusts its performance to meet your deadlines.

If you set a five-hour deadline for a project that you can complete in two hours, your mind will level down the productivity level to the five hours—and vice versa. 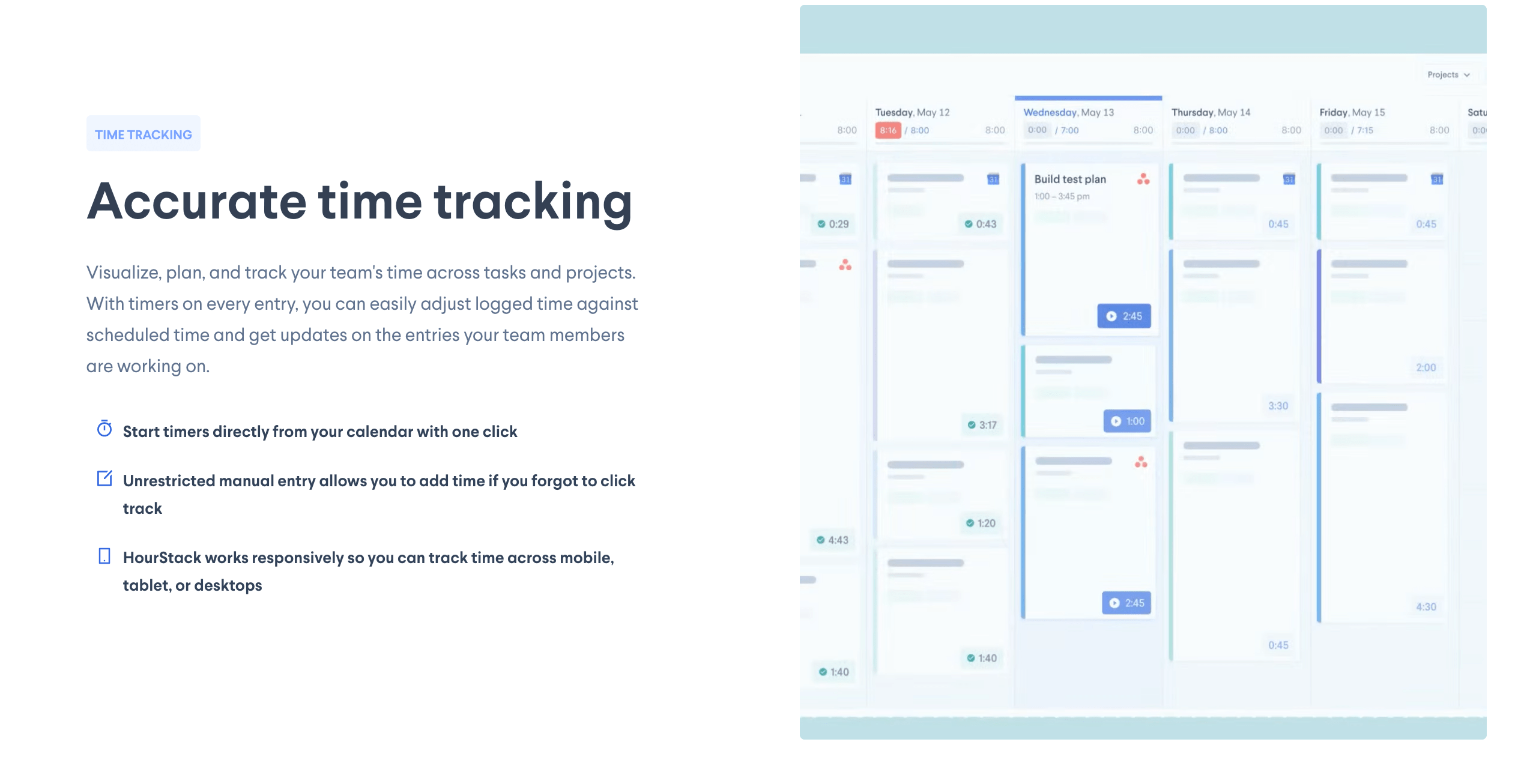 HourStack applications allow you to judge your working capacity.

As the visual representation of Hourstack is similar to the time blocking system, you can use it as a time tracker and a task manager.

If you prefer minimalist visuals, Toggl Track will serve the purpose.

4. Leave Blocks for Breaks and Spontaneity

The phrase “All work and no play makes Jack a dull boy” may have referred to a workaholic, but scheduling time blocks sans breaks could literally dull your mind.

According to research, a person needs at least one short break after every uninterrupted 52 minutes task.

Francesco Cirillo initially observed this phenomenon in the late nineties and introduced the Pomerado technique.

The method recommends 24 minutes’ time blocks for projects with brief intervals to break the monotony.

Over the years, as multiple researchers took the measures, it was agreed an average 17-minute break after every hour might improve productivity. Apart from breaks, spontaneity is also said to sharpen your mind, improve creativity, and reduce stress.

You’ll notice these spontaneities in many popular apps, the 30-day challenge app being a classic example.

Just like your physical side, your mind requires similar care to avoid early burnouts. Keep your calendar flexible to cover breaks and unplanned events.

There’s always a possibility your time blocking planner might not meet success on the first try.

By taking control of your time, you are practically creating a ripple effect.

The action is akin to adopting a habit, and we all know how extremely time-consuming it can be.

Take a few weeks to adjust. Conduct weekly reviews of your progress, and tinker with the schedule accordingly.

If you still feel unsure and need further guidance, check out “Deep Work” by Cal Newport.