You are here: Home / Get inspired + Success Advice / 15 Common Reasons Why MOST Startups Fail

Thinking of starting a new venture? Then you might want to hear this.

Every year, nearly a 6.5million kick-start their business with the hope they would surely reach success in no time. But by the time the fifth year approaches, barely 50% survive.

The worst part is 90% capitulate in the first year!

My purpose is not to scare you off, but to highlight the risk factors involving startups. It’s quite easy to get swept away by the excitement of a new idea. However, even a minor error could cause a domino effect, proving fatal to your company.

If you’re aware of the risk, though, you may be ready for the challenge.

Here’s an infographic with the gist of the following reasons: 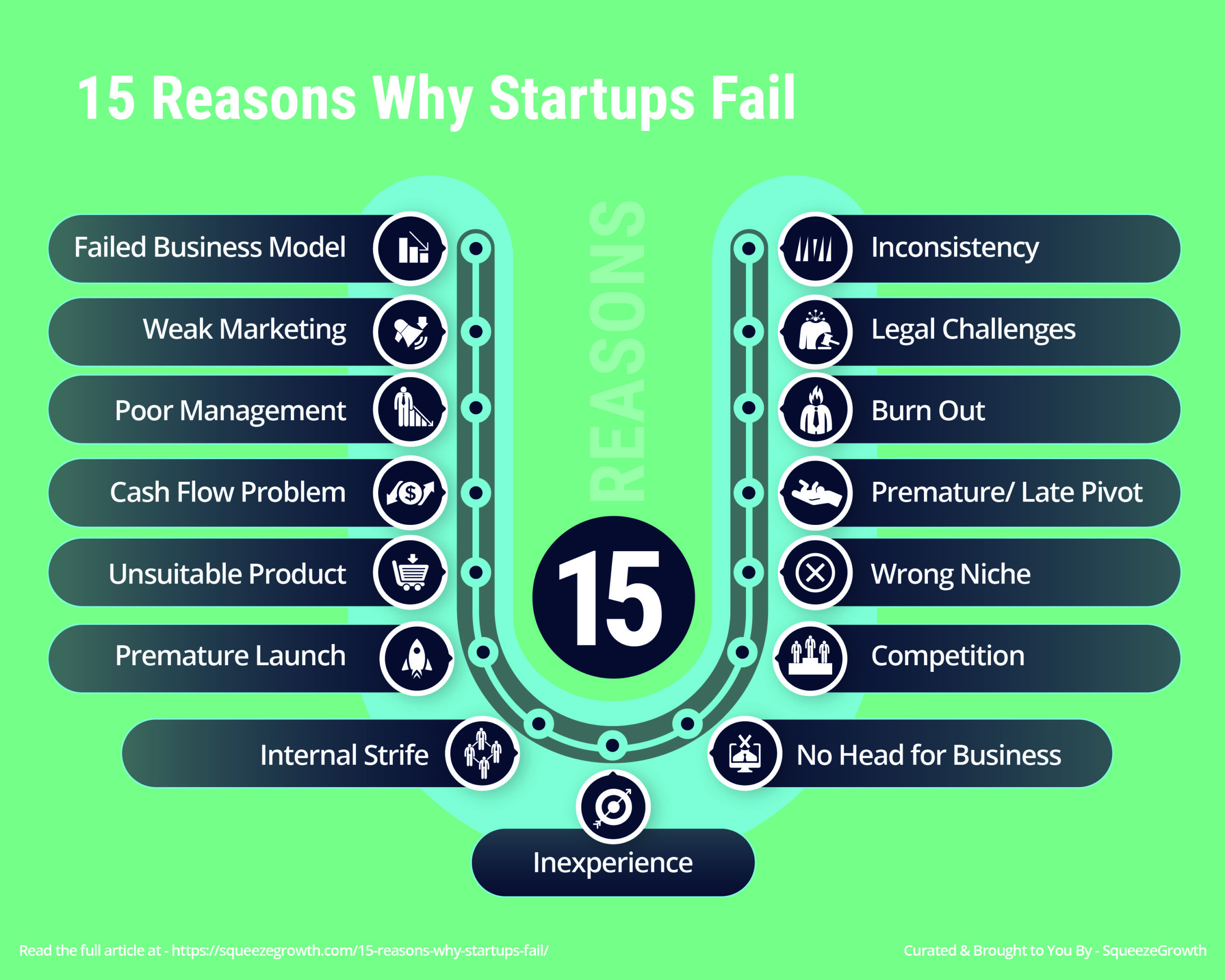 Every Founder puts high expectations on their idea, and there is nothing wrong with it.

But while some are, indeed, brilliant, not all business models execute well—hence the failure.

Moviepass is the prime example.

The theatre-subscription startup came up with an amazing concept to act as an intermediary ticket seller.

All went smoothly until they reduced their sale price to increase their customer base.

Although the dropped price did attract customers, the company didn’t think through its strategy and encountered massive financial constraints. When they attempted to pull back, they lost their customers and went bankrupt.

Moviepass could’ve astonishingly boomed had their business model not been flawed from the onset.

My point is If your business model is unfit for your product, your startup will probably go insolvent.

Calculating your cost per customer to construct a realistic business model. Recognizing your customer’s worth gives you a clear picture of your product’s feasibility.

43% of startups fail because of poor marketing strategy and vague Product/market fit.

Often, by overestimating the value of their product, entrepreneurs drive wrong assumptions and inadvertently hurt their business. Some blindly target the general audience in the hope of capturing a wider group but end up with higher costs, instead. Targeting the wrong market has also led to many a disaster.

It’s like publishing your lifestyle magazine and adding random content plucked from the trending topics, with no connection between them.

Hire an expert. I can’t stress this enough. Marketing strategies only backfire due to inexperience or replicating others without proper consideration.

How you time your product launch and how you reach your target audience could significantly affect your company.

Most startups make do with a jack of all trades to save on human resource expense.

While their actions create discontent in the team, it’s the dissent among senior management that’s practically a death penalty for the business. All because the owner might’ve lacked the foresight to build a steady structure.

Founders have been known to focus entirely on building customer bases and revenues. But as the company grows, the weak organizational structure struggles to bear the pressure.

Overwhelmed, the team inevitably stumbles at some point, and the accumulated mistakes topple over, killing the business.

Think of the team as the cogs in the wheel. If one is stuck, the whole mechanism crumbles.

With that in mind, groom your leadership skills to gain long-term loyalty. Distribute your focus evenly. Above all, smooth out the communication between team members.

A business incurs nothing but expenses in the first year before they cross breakeven and begin to generate revenues.

Since seed funding typically runs out in 12 to 24 months, the CEO forecasts budgets based on milestones and injects cash as such.

The complication that startups face is the lack of investments to meet the millstones.

Founders are ordinarily humble folks. Many invest personally borrowed money before they seek angel investors. Given the considerable time the investment search takes, usually, their capital dries out prematurely.

Unfortunately, this scenario is far too common. In 2018 alone, an astounding 82% of startups went under from a fund shortage.

Work on a solid pitch deck to quickly attract investors. How much a strong pitch influences funding may surprise you.

The entire purpose of the product is to solve a problem or entertain. In both cases, a product must offer a value proposition to customers.

Sadly, not all potential entrepreneurs consider customer interests. Once an idea occurs, they quickly plan to bring their baby to life, oblivious, their product might not go well with their potential customers.

When the product is launched, they receive a lackluster response, realizing too late there is no market for their product.

Ignoring customer needs is the reason some startups, despite reaching their target leads, fail miserably.

Seek customer validation. Later, if you find something lacking, tweak your product to fit your potential customers.

The tech industry is incredibly innovative. Unsurprisingly, it also has the highest startup failure rate, particularly when integrated into traditional business models.

Let me explain it through a real-life story.

In 2016, a woman saw the potential to cut poultry sellers’ costs by bringing buyers and sellers into one place. After initial market research, Janette Barnard successfully found customer validation and angel investors and started her venture.

When she introduced her platform, she received nothing but disappointment.

While many appeared interested during the initial survey, only a few responded positively.

After a long 12-month battle, Jannette had to cease operations.

Time your product right or bring in enough investment to survive until you can shift your customer’s mindset toward your product through lead nurturing.

A partnership is part of any scalable startup. But when one partner puts more effort than the other or micromanages everything, the trouble begins.

In the aftermath, resentment grows, disputes escalate, and ultimately the company is torn apart by internal strife.

This is, of course, a simplified version. If you want to see the true damage internal strife can cause, read the ArsDigita case.

The web development company’s new management made such a muddle of things, their major financial investor backed out at a critical time. Predictably, the enterprise failed.

Too busy fighting among themselves, they leave matters unresolved, descending the already volatile startup into failure.

It will not be easy. The urge to give your opinion might even become unbearable at some point. However, in the long run, internal disputes will certainly lessen.

It’s far too common among founders to be lacking in business knowledge. Highly technical they might be, but little do they know about marketing.

Regardless of how scalable your product is, if you can’t sell them, you’re doomed. What exactly is why some startups fail.

And that’s not all.

As you know, a leader creates the company culture.

If you’re inexperienced in team management, it may leave space for internal politics to grow, turning the environment extremely toxic.

Groom your leadership skills and join a partnership with people having unique skill sets.

Partners, no doubt, come with their own set of challenges, as shared above; still, two owners are more equipped to manage a startup.

Many founders start their businesses with a promising future. But shortly after, they lose patience, and, in turn, their venture.

Inspired by success stories, they decided to follow, however, found it more trouble than they thought. Maybe they wanted to get out of the 9 to 5 circle, except, seeing a strenuous future, they gave up quickly.

Amazon—a multinational platform — was once a mere garage launch, too, did you know that? Today, the founder’s net worth alone is approx $200 billion.

Everyone starts small and only through consistent efforts, gradually builds their empire. Choose a niche you are passionate about or hire someone who is.

Sometimes unexpected legal challenges could bring a startup down permanently. In fact, it has repeatedly happened in the past.

Every heard of Aereo?

A New York-based enterprise introduced a concept that allows their customers to view broadcasts on their Apple devices. Following the launch, they not only received excessive criticism but several lawsuits from other media outlets. Eventually, the company buckled under the pressure and went down.

Always take environmental, social, governmental, and ethical factors into consideration during your market research. It’s better to discard a controversial idea than pay for it later, as Aereo did.

Startup demands so much time owners end up spending 40% of their time on mere administrative jobs.

The problem would’ve been solved easily through delegation, but letting loose tight-fisted control is surprisingly difficult.

While statistics say early burnouts make up only 8% of startup downfall, the reality is far more serious.

In a bid to do everything themselves, owners sacrifice family time, straining relationships.

Since we humans are social creatures and our mental health highly depends on contented relationships, you can imagine the gravity of the situation.

In every entrepreneur’s life, there comes a time when one of their products ceases to become an asset.

In such a critical situation, a pivot ideally saves a company from utter ruin.

But some owners, feel reluctant to abort the idea, continuously draining the resources.

Later, when they do decide to change course, it’s usually too late.

Keep a contingency plan nearby for the occasion. A well-timed pivot can avoid maximum damage.

Did you know one of the most expensive businesses likely to fail is the restaurant?

Considering the people’s interest in food, one would think restaurants could see no misfortune, but naturally, the reality is otherwise.

A startup is practically an experimentation.

While an expensive venture is not an issue with financial backing, choosing a niche with a negative track record is the reason startups fail.

Take a feasibility report on the niche you’re interested in if you lack the experience. If the success rate is high, then, by all means, go for it.

Ever heard of a cutthroat competition?

It means the company is so protective of their turf they wouldn’t mind metaphorically cutting their competition’s throat to get rid of them.

19% of startups fail because either their product couldn’t beat the competition or their willy competitors subsidized their sales to keep the market in their clutches.

Bring value proposition to your product to gain an edge over your competitor.

15. No Head for Business

Lastly, one of the unaccounted-for reasons for startup decline is the owner’s lack of affinity for the business.

Some people simply don’t have a head for business. It’s not their fault, but the result of the environment they received growing up.

A 9 to 5 family child would likely become an employee than an entrepreneur.

I suggest reaching out to someone already in the same business and learning the ropes before starting your company.

The above list will give you an incredible insight into the possible obstacles startups face and how to avoid them.

If you’re already an entrepreneur and your business is not going well, evaluate which among the 15 is the cause and start making counter-plans. Good luck!